Effect of cache on performance and calculation size

Introduction to the Himeno benchmark

Being the code very simple and easy to compile and to execute, users can measure actual speed (in MFLOPS) immediately.

# We have upgraded the source code from “Himeno benchmark 98” to “himenoBMTxp” with the aim to decrease the difference of calculation time between computers that occurs due to the difference of their performances. As for Fortran versions, results obtained with the previous version can be compared with the one obtained with this version, because we didn’t change the kernel of the code from the old version. But, as for C versions, please be careful that we have changed a method to declare an array. We did so to maintain consistency with that of the Fortran versions. (December, 2001).

The Himeno Benchmark is made available under the LGPL2.0 or later.

Effect of cache on performance and calculation size

Himeno benchmark score is affected by the performance of a computer, especially memory band width. The following figure is the result of a vector computer and a PC measured with the “cache test benchmark”. This figure reveals that computer architecture plays an important role in determining the feature of memory or cache. 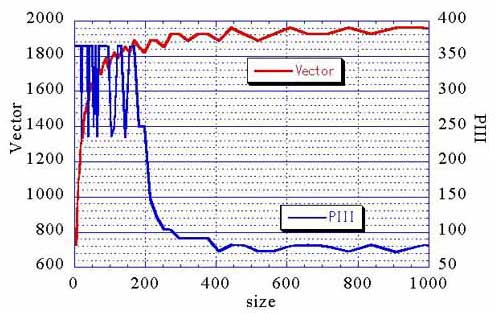 This figure also shows that each time arrangement is enlarged and overflows from cache, the MFLOPS values of PCs become worse. This means that calculation size must be fixed to compare computer performance in a fair way. Himeno Benchmark fixes the following four calculation sizes.

If you have any questions for need for further assistance, please send a message to himenoBMT@riken.jp.

Information web site of the supercomputer and seurvice for empryees